The following article by Alan Northcutt was published in the December 6th edition of the Waco Tribune Herald:

Conference of the Parties 27 (COP27), Nov 6 through 20,2022, was the annual meeting of all nations on Earth, tasked with saving our world from the ravages of cataclysmic climate change.  In a year in which one-third of Pakistan was submerged, a heatwave killed 16,000 in Europe, and Hurricane Ian was one of the costliest storms in world history, the critical role of this COP was evident.  Having witnessed a major breakthrough at COP21 in Paris, the Friends of the Climate contingent approachedCOP27 in Egypt with hope.

The setting.  Sharm El Sheikh is a beautiful, arid, subtropical city at the southern tip of the Sinai Peninsula, on the Red Sea, at the mouth of the  Gulf of Aqaba.  On the “bay of the wise,” Sharm is a popular destination  for tourists and large conventions.  The area’s rich biodiverse coral reefs, bathed in light green crystalline water, were a constant reminder of the vital importance of the COP’s work to limit ocean warming.  The Egyptian government quickly created a “green” Sharm:  electric buses  transported attendees, a few electric vehicle (EV) charging stations were installed, the lavish hotels were adding solar panels, and the International Hospital was “eco-friendly.”  The summit grounds were completely unlike those of COPs in Paris and Madrid.  They were expansive and lush, with meeting halls, abundant climate sculptures, interactive displays, pools, bridges, fountains, and light shows.  Although Egypt’s motive may have been to dazzle the world, the setting was warm, inviting, and inspirational.

Freedom of speech.  Protest was severely limited at this COP, although this may partially relate to the 2005 terrorist attack in Sharm that killed 88 people.  Armed police and surveillance were widespread, demonstrations were officially allowed distant from the summit only, and pre-COP arrests were numerous.  For the first time in three COPs, we did not participate in a protest.

Attendees.  Some 35,000 participants included heads of state, diplomats, negotiators, climate scientists, business leaders,  volunteers, activists, and  other members of civil society.  Being part  of huge throngs of individuals, all devoted to the climate struggle, filled our small delegation with feelings of solidarity and optimism. Unfortunately, about 600 fossil fuel representatives were also present, with influence designed to delay needed limitations on fossil fuels.  We also encountered individuals who inspired us:

The results.  COP negotiations are extremely detailed and tedious, requiring consensus of almost 200 nations, with every word subject to debate.  Although I agree with activists that we need immediate bold  action, I also understand the practical difficulty of designing documents acceptable to all parties.  The following were completed or inaugurated at COP27:

The bottom line. Despite the historic victory for climate justice in the Loss and Damage agreement, COP27 did not effectively address anthropogenic GHG emissions. The planet has warmed 1.2C above pre-industrial, and the fossil fuel industries greedily plan more drilling for hydrocarbons that we must not burn. Limiting warming to 1.5C will be impossible without the zealous effort of the Paris signatories, businesses, non-profits, scientists, entrepreneurs, and individuals. Waco absolutely needs more EVs, solar panels, heat pumps, electric stoves, and action by the City Councils. As UN Secretary-General Antonio Guterres has warned: “We are in the fight of our lives, and we are losing. GHG emissions keep growing. Global temperatures keep rising. And our planet is fast approaching tipping points that will make climate chaos irreversible. We are on a highway to climate hell, with our foot still on the accelerator. “ 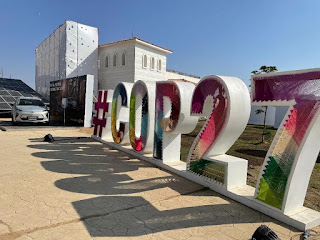