The following article by Alan Northcutt was published in the August 3rd edition of the Waco Tribune Herald:

The climate crisis has encircled and ravaged the globe in 2022, with land and ocean heatwaves, drought, crop damage, wildfire, floods, famine, and death.  The City of Waco has been scorched, with 40 days of 100F or above.  The longstanding drought in McLennan County has progressed to “extreme” in about 90% of its area, and “exceptional” (the highest level) in 10% of its area.  With action to cut greenhouse gas (GHG) emissions faltering at the federal level, response at the state, municipal, and individual level has become vitally important.  With transportation the largest source of GHGs in the U.S., many Americans are making the switch to electric vehicles (EVs), and vehicle demand currently overwhelms supply.  Yet misconceptions about EVs are widespread, slowing this urgently needed electrification of transport.

The highly respected and apolitical Consumer Reports has published “Battery Electric Vehicles and Low Carbon Fuel,” based on questions asked 8027 adults in February 2022.  From this data, I have extracted the most common EV misconceptions and will debunk them.

For climate science deniers, there is no reason to buy an EV.   A 2013 study from MIT found that internal combustion engine (ICE) vehicles cause 53,000 excess deaths per year in the United States, from tailpipe pollution, a toxic mixture of nitrogen oxides, carbon monoxide, sulfur dioxide, and particulate matter.  Thus, driving an EV protects health, saves lives, and lowers health care costs.

EVs are expensive and are for the wealthy only.  First, reasonably priced models are available:  the Nissan Leaf at $27,400, Cooper Mini EV at $29,000, and Chevy Bolt at $31,000, all before applying federal tax credits. Second, EV purchase price is often higher than comparable internal combustion engine (ICE) vehicles, but this difference is modest when converted to a monthly payment, the purchase method favored by most Americans.  Third, a study by Consumer Reports in 2020 found EV lifecycle savings of $6000 to $10,000 when comparing the EV and ICE version of a model, due to EV savings on fueling costs, lack of oil changes, and minimal maintenance.

Charging logistics are a roadblock to EV purchase.  Even in 2022, it is not widely understood that the vast majority of charging is performed at one’s home overnight, and commercial charger usage is usually limited to trips away from hometown.  The exception to this rule is for those renting their homes.

The number of miles between charges (vehicle range) is inadequate.  Of the 100 EV models available today, only 7 have a range less than 200 miles.  Since in Texas, the average daily distance traveled is 48 miles (Bureau of Transportation, 2017), EV range is adequate for most daily driving.

The cost to install a home charger is prohibitive.  The price for the necessary Level 2 charging hardware (240v.) ranges from $119 to $1299 on Amazon, variation related to features like weather resistance and Wi-Fi capability.  Electrician fees, to run the 240v. cable, are difficult to project, but are roughly $500 to $1000.  Thus, the cost of charger installation is often exaggerated.

Public charging stations are too sparse.  Because of multiple variables, this requires a nuanced explanation.  For Tesla and non-Tesla owners with home charging, EV ownership is convenient.  For Tesla and non-Tesla owners without home charging, EV ownership will be more complicated, because there are only one Level 3 Tesla supercharger and one non-Tesla Level 3 charger complex, both on I35 in the Waco area.  For distant travel, now is a great time to be a Tesla owner—the supercharger network is extensive and well maintained, and stations are not yet crowded.  The exception may be in high Tesla- density states like California, where waiting to charge may occur.  For non-Tesla distant travel, charging stations can generally be found, but are not as numerous as Tesla and occasionally may malfunction.  Similar to Tesla, the stations have the advantage of typically not yet being crowded in Texas. (My observations are largely based on 6 years of driving a Chevy Bolt and Model 3 in Texas and Colorado).

Battery replacement is too expensive.  In reality, the traction (drivetrain) batteries of EVs are rarely replaced.  EV battery warranties are commonly 8 years or 100,000 to 150,000 miles, with only 30% range degradation at 100,000 miles.  Beyond the warranty, experts predict EV batteries will maintain a charge up to 10 or 20 years, longer than the life of the rest of the car.

Performance of EVs is poor.  This is one of the most pervasive myths about electric vehicles.  In reality, since EVs do not have the delay in developing torque seen in ICE vehicles, acceleration is very brisk.  Of 100 EV models now available, 51 reach 0 to 60mph in less than 5 seconds.  The top speed of the Lucid Air Dream is 168mph, and of the Tesla Model S Plaid is 200mph.  Thus, for those focused on performance, abundant choice is available in the EV market.

As the world, including Waco, is suffering the climate impacts of this blazing summer, driving an EV remains an important action individuals, governments, and organizations can take to combat the climate crisis.  At the same time, driving an EV contributes to better local air quality and is an exhilarating experience. 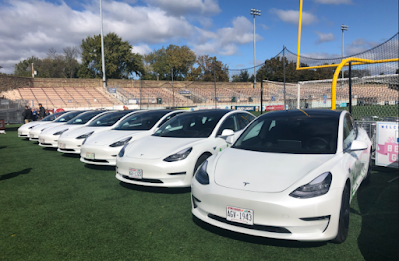