What Happened In Glasgow

The following column by Alan Northcutt appeared in the Waco Tribune-Herald on Saturday, Nov. 27. 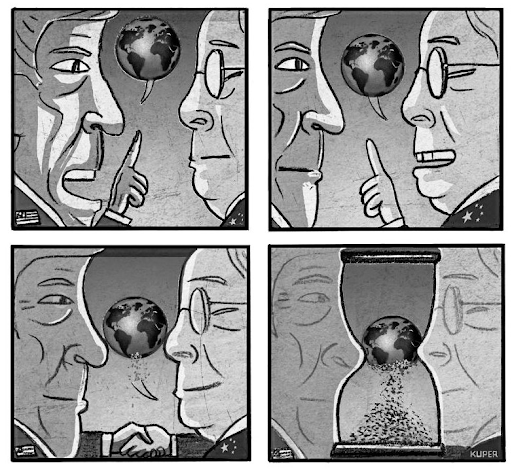 The Conference of the Parties 26 (COP26), heralded as the “last best hope” for addressing the climate crisis, began in Glasgow, Scotland on November 1st of this year.  The event was a complex medley of people from 197 countries:  high government officials, delegates, lobbyists,  scientists, industry representatives, non-governmental organizations, protestors, and security personnel.  COP26 was two weeks of speeches, debates, negotiations and development of precisely worded  agreements and pacts between countries.  This climate summit was of vital importance to the future of our planet.  The highlights are reviewed here.

The 1.5C goal.  In the Paris Agreement of 2015, each nation announced its own greenhouse gas (GHG) emission reduction pledge, or Nationally Determined Contribution (NDC), with the goal of limiting global temperature increase to 2C above the pre-industrial mean.  But the science since Paris strongly supported instead a goal of 1.5C, to avoid horrendous impacts, especially the submerging of small island states.  Thus, in Glasgow, the target clearly became 1.5C, with the cry “1.5 is still alive.”  In fact, the peer-reviewed science notes that stabilization at 1.5C of warming is possible, but “immediate and drastic global action is required.”  That global action computes to a 5% decrease in global CO2 emissions per year.   The primary task of the summit was to elicit stronger NDCs from member countries, which combined would limit warming to 1.5C.

Critical attendees.  Of the 197 countries represented at COP26, the heads of state of large emitters China and Russia were notably absent.  Just as troubling, the fossil fuel industry, which has spread and funded misinformation on climate change for decades, was represented by 503 lobbyists, the largest delegation at the summit.  Tragically, the voice of developing nations and the global south was suppressed since many delegates and activists could not attend due to lack of COVID vaccine in their countries.

Glasgow Leaders’ Declaration on Forest and Land Use.  Multiple supplementary agreements were reached in Glasgow that did not involve all 197 COP nations.  One hundred forty-one countries, representing 91% of global forests, pledged to halt and reverse  deforestation by 2030.  To prevent conversion of this critical carbon sink to crop land and pasture, $19 billion was pledged from private and public sources.

Global Methane Pledge.    One hundred and five nations pledged to slash emissions 30% by 2030 relative to 2020 levels, largely through preventing leaks from oil and gas wells, and pipelines. Because of the enormous climate warming potential of methane,  “cutting back on methane emissions is one of the most effective things we can do to reduce near-term global warming and keep to 1.5°C,” observed the European Commission President.

U.S.-China Joint Glasgow Declaration on Enhancing Climate Action in the 2020s.  Since China’s President Xi Jinping did not attend  COP26, this surprise announcement was celebrated at the summit.  Although the document was lengthy, at 16 sections, the language was not specific,  confirming  details of the Paris Agreement, and agreeing to cooperate on CO2 and methane emission reductions,  and on adaptation to the warmer world.

Glasgow Accord on Zero Emissions Vehicles.  A remarkable pledge to work toward sale of zero emission cars and vans only in leading markets by 2035, and in all markets by 2040, was signed by General Motors,  Ford, Volvo, Mercedes-Benz, BYD, Jaguar Land Rover, Canada, India, California, Washington, other territories, and 27 fleet owners.  The accord includes two of the three big US automakers, and further affirms that the future of light duty vehicles is battery-electric.

Beyond Oil and Gas Alliance (BOGA).  Eleven countries, including France, Costa Rica, Denmark, and Ireland, launched a first ever alliance formed to set an end date for national oil and gas exploration and extraction.  This reinforces the scientific mandate to leave approximately 70% of current fossil fuel reserves in the ground.

Glasgow Climate Accord.  The primary objective of COP26 was a Pact signed by all 197 nations.  The detailed 10-page document contains 97 statements in short paragraphs.  The essential features are:

The bottom line.  Since the Paris and Glasgow agreements have no enforcement mechanism, voluntary implementation of each country’s NDC is critical.  The highly respected Climate Action Tracker has calculated that if all nations fully implemented their NDCs, global mean temperature would still rise 2.4C, an increase incompatible with human civilization as we know it.  The good news is Glasgow provides that countries will update their pledges in 2022, rather than wait five years.   Although many have called COP26 a failure because it does not reach the 1.5C goal, the 2.4C is an improvement, and useful agreements were reached in multiple emission sectors.

What can we all do?  Rather than accepting fatalism and inaction, every entity—individual, organization, city, school board, county, region, state—should take a new step toward cutting their GHG emissions 5% this year—and each year.