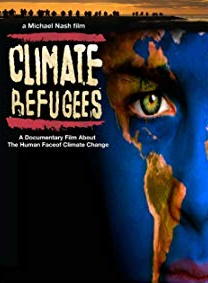 A climate change refugee is a person who has been displaced by climatically induced environmental disasters.  Such disasters result from incremental and rapid ecological change, resulting in increased droughts, desertification, sea level rise, and more frequent occurrence of extreme weather events, such as hurricanes, cyclones, fires, mass flooding and tornadoes.

These developments instigate mass global migration, and with it, border conflicts.  For the first time, the Pentagon has decided to consider climate change a national security risk, and the term “climate wars” is now mentioned throughout vital discussions in Washington, D.C.

The filmmakers traveled the world for nearly 3 years to document the impact of climate change, witnessing inhabitants of countries forced to leave their homes by climatic events with little or no protection. The film features a variety of leading scientists, relief workers, security consultants, and major political figures, including John Kerry and Newt Gingrich. All make a strong case that, whether human-caused or a product of nature, the changing climate is already creating humanitarian disasters and will inevitably lead to worldwide political instability.

"This film is an agent for social change."
--Robert Redford, New York Times

"A resounding Wake-up call for every human being.  A must-see film that puts the human soul in the science of climate change."
--Sherri Quinn, NPR