The presentation on August 14th to the Advisory Board by Alan Northcutt was well received.  The Board members were very attentive during the talk, and there was applause at the conclusion.  The presentation consisted of an explanation of Go Renewable Waco, a list of our supporters, descriptions of the serious impacts of climate change globally and in Waco, suggested steps for the City of Waco, and an explanation of how the program would positively impact the community.

After the talk, several Board members and the City Manager suggested the Board explore electric buses and charging stations for the October meeting.  This is significant, as it is the first statement by a City governmental group that it WOULD take action.  We have plans to follow up at the Sustainability Board's October meeting, and other steps are brewing.

Many thanks to those who attended the presentation.  Stay tuned for our next group action, and remember how vital this work is.  This 2018 summer of weather extremes again illustrates the power and danger of anthropogenic climate change.  As the climate impacts grow larger, the Trump administration and Republicans take steps to make the situation worse.  So it’s up to Waco and cities across the country to go 100% renewable and slash their GHG emissions. 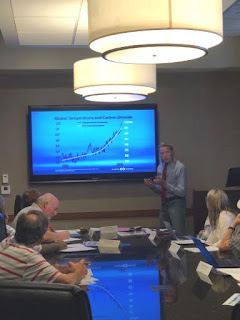