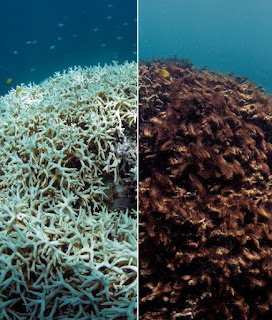 Coral reefs around the world are vanishing at an unprecedented rate. Divers, photographers and scientists set out on an ocean adventure to discover why the reefs are disappearing and to reveal the underwater mystery to the world.

The beginning covers the biology, structure and importance of coral reefs.  Then the severity of ongoing bleaching with coral reef death is explained.  Destruction of our planet's coral reefs is a climate change impact that is happening now, and is an early warning of the catastrophes to come if we don't act decisively.

The film is particularly compelling when following Zack Rago, a self-proclaimed coral nerd whose love of the organisms is palpable and infectious.
-- New York Times