The following is a report by Alan Northcutt on his experience being interviewed on the radio by conservative Temple radio talk show host Lynn Wolley: 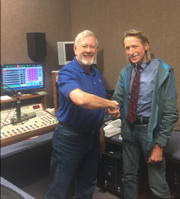 On March 10th I survived the hour-long conservative talk show with Lynn Woolley (left) about climate change. Overall Lynn is a friendly guy and was pretty fair, never cutting my microphone.  I did feel very rushed at times and had to insist on making my point.

I mostly responded to various climate denier-type questions, such as sunspots, no climate change effects yet (!!), etc.  I think I responded pretty effectively to these questions.  We also took phone calls on this live program.

I actually have sympathy for the denier position, because I understand the power the climate denier industry has had over the last 30 years in spreading misinformation. Also, climate science is a relatively complex field and I think difficult for many non-scientists.

I suggested that I would later answer emails he received to further respond to the audience questions on the topic.

We parted amiably and agreed that we will do this again, as I think it is useful.

His website does not archive the programs. Therefore, I am trying to obtain a copy of the hour and will attempt to post it later.