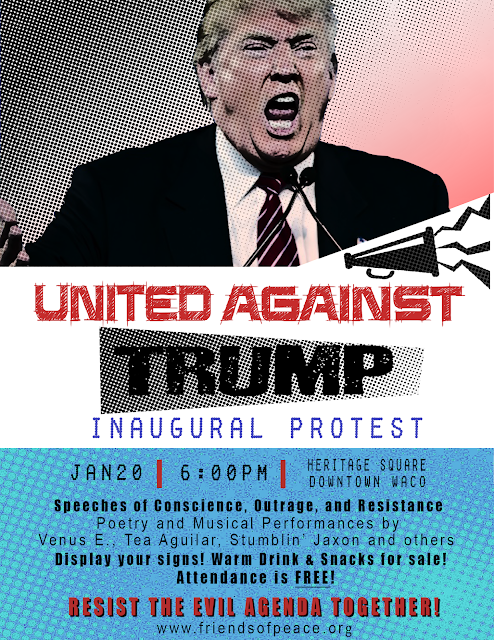 Join us for speeches of conscience, poetry, and music by Venus E, Tea Aguilar, and Stumblin' Jaxon.   We will turn a very dark day into a time to express outrage, display our signs, build unity, and amplify our inspiration for the hard work to come over the next 4 years.  We believe it is vital to express clear opposition to Trump's positions on nuclear proliferation and anthropogenic climate change. His proposals represent an existential threat to mankind.

Climate science indicates a global atmospheric limit of 565 gigatons more CO2 to keep global temperature increase to 2°C above the pre-industrial level.  At approximately 30gigatons emissions now, we have only 19 years to halt these emissions through conservation, conversion of our energy system to renewables, and regenerative agriculture.  Thus Mr. Trump's stated plans to return to CO2 intensive energy sources such as coal will severely imperil our ability to make the rapid transition to renewable energy.  In effect, Trump has placed oil company profits above the human need to maintain a livable biosphere.

Speakers for the protest are an excellent and diverse group of community leaders:

Please plan now to attend as individuals and organizations.  Coffee, hot chocolate, snacks. and anti-Trump bumper stickers are FREE.   And if your organization would like to endorse this event, please email: anorthc@aol.com


To endorse or ask questions:  anorthc@aol.com