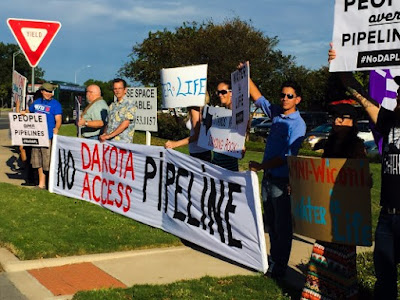 On Tuesday, November 15th, Waco Friends of Peace/Climate will host a protest action in front of the United States Federal Courthouse at 800 Franklin Ave in Waco.  The action will last from 4:00 pm until 6:00 pm.

This event will be part of the actions around the world on November 15.  The NO DAPL movement is the biggest issue at this moment in the climate change community.  It is a REAL issue for the Standing Rock Sioux people, as they work to protect their water and sacred sites.  It is a REAL issue as the science tells us we must build NO more new fossil fuel infrastructure if we are to have hopes of surviving climate change.  And it has become symbolic of our struggle: the people and science against the greed of the fossil fuel corporations.

And with the election of climate change denier Donald Trump as President November 8, we must work even harder the next four years, starting immediately.  This protest is the perfect opportunity to express our commitment to defeating the environmentally destructive policies Trump has promised.