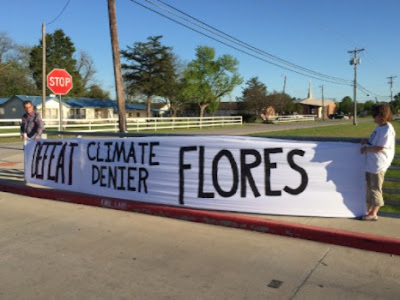 The April 2nd Town Hall of Mr. Flores in Waco was a unique opportunity to clearly inform the Congressman that his climate change positions do NOT represent his constituents.  Near the event entrance, several members held a huge banner stating "DEFEAT CLIMATE DENIER FLORES."  His public statements on climate change indicate that he does not accept the reality and existential threat of climate change.  His environmental voting score with the League of Conservation Voters is 4%.


All attendees had to pass near our banner to enter the venue and we were informed that Mr. Flores did see our message!  Clearly, we were able to SPEAK TRUTH TO POWER.  Also, the Waco Trib published a photo of our action, and a response from the Congressman claiming he is NOT a climate science denier.


Anytime our message strongly reaches our "Representative," and the local newspaper carries any discussion of this most vital issue--we have been successful. Thanks to the dedicated activists who helped in this protest.