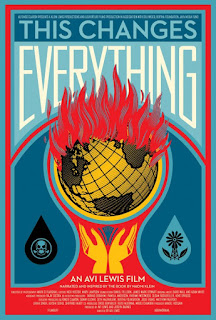 
This outstanding film was produced in conjunction with Naomi Klein's bestselling book of the same name, and was filmed in nine countries and five continents over four years.  This Changes Everything is an epic attempt to re-imagine the vast challenge of climate change.  The film presents seven portraits of communities on the front lines, from Montana's Powder River Basin to the Alberta Tar Sands, from the coast of South India to Beijing and beyond.  The cinematography is stunning, and the educational impact is profound.

“A film that brings our peril into focus and what we might learn from despair.”
– Alice Walker, author and activist

“The realization that a solution is possible, well, that changes everything”
– Globe & Mail

“Klein and Lewis paint a picture of a post-fossil-fueled, post-capitalist future that seems not only within reach, but like a place where we actually want to live”
– YES Magazine

“Klein and those impassioned protesters provide something that has been in short supply in the predecessors — namely, a modicum of hope for the future”
– LA Times