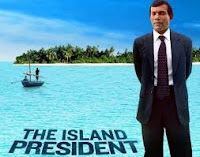 A film about one man's mission to save his nation and perhaps the planet, The Island President is a riveting, uplifting story that is impossible to take your eyes off of.  President Mohamed Nasheed of the Maldives is confronting a problem greater than any other world leader has ever faced--the survival of his country and everyone in it.  Nasheed brought democracy to the Maldives, and then faced destruction of his islands by the rising oceans secondary to global warming.

This amazing film describes the damage occurring NOW from global climate change, while presenting a moving story of one man's struggle and the visual beauty of this island nation.