The protest against drone warfare last Saturday from 1:30 - 3:30 pm was a great success.  About 20 activists were present on a beautiful, sunny afternoon of about 70 degrees .  The crowd was impressive because it was larger than some crowds we amassed even during protests of the Iraq War!

We held a large banner that read: DRONES KILL KIDS, and many participants displayed smaller signs as well.

The reception we received at the busy intersection of Valley Mills and Waco Drives was almost entirely positive.  Folks from Killeen and Austin joined the Waco contingent.  A libertarian who shares many of our views on foreign policy joined our group.  And a first in the history of Waco FOP:  folks in a car stopped briefly and contributed several dollars to our cause!

I'm sure all activists who participated enjoyed the time spent together and the opportunity to speak out against killing of innocent civilians done in our name.

In addition to all the motorists we reached with our message, we also had press coverage.  A nearby photojournalist recorded images of the event, and a kind reporter from Channel 10 in Waco did an excellent TV news report which included video of the group and an interview with one of our members:

Thus our message reached tens of thousands  additional folks.
Many, many thanks to Professor Froberg who encouraged us all to do this protest, and to all the FOP activists who donated their time to this important effort. 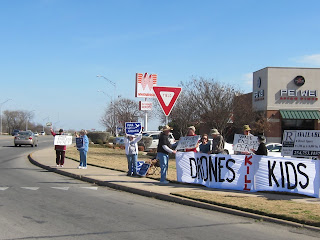 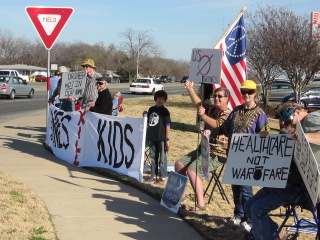 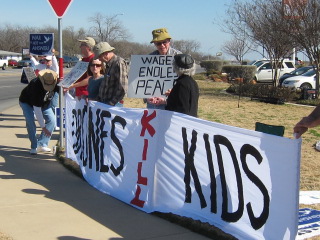