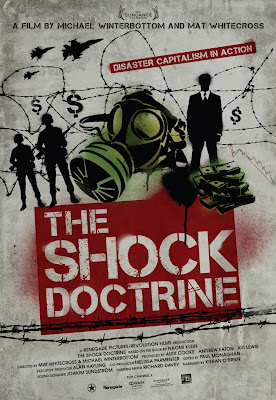 
Naomi Klein published The Shock Doctrine in 2007.  Collective traumas, wars, coups, nautical disasters, terrorist attacks:  these kinds of events put people into a state of shock.  We regress to a state of childish malleability, and easily believe our leaders when they claim to be protecting us.  One of the first people to identify the phenomenon was Milton Friedman, who won the Nobel Prize for economics in 1976.

Friedman advised politicians to implement painful economic reforms (massive tax cuts for the wealthy, deregulation, privatization of the public sphere) immediately after crises, before people had a chance to regain their composure.  He called it shock treatment, and Klein argues that it has become the “shock doctrine.”

This film is particularly relevant to us because of the ongoing crisis in the United States, with the move from the Right to initiate "shock treatment" through the electoral process.  This movement began with the Reagan Revolution, was intensified by 911 and our reaction to it, and has accelerated in recent years with the economic meltdown at the end of the Bush years.  The upcoming election in this country could very well result in the ultimate triumph of radical conservatism and the implementation of the "shock doctrine" in the United States.