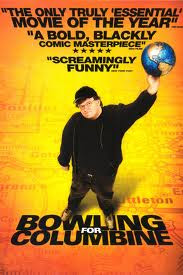 The title for Bowling For Columbine, Michael Moore’s brilliant 2002 documentary, alludes to the 1999 school shooting at Columbine High School in Columbine, Colorado.  Moore’s film deserves a second look in the light of the steady stream of shootings that has occurred in the years since, the latest of course being the recent one in Aurora, Colorado.

Bowling For Columbine is a thoughtful, probing attempt to explain what it is about the nature of American society that makes us so prone to gun violence (9,146 deaths in 2009, as opposed to 173 in Canada).  Moore manages to tackle a vital subject and deliver a serious, thought-provoking film laced with his trademark brand of wit.  The film is every bit as relevant today as it was when it was first shown in 2002.