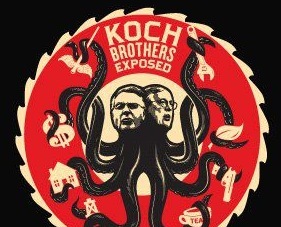 Koch Brothers Exposed is the latest progressive documentary by Robert Greenwald.  The film weaves together a series of short films that examines the principals of Koch Industries, one of the nation’s top polluters.  Charles and David Koch are infamous for their funding of think-tanks that aim to deregulate business and scale back government programs such as Social Security, Medicare and the new healthcare reform law.

“The Kochs are breathing, human representatives of the worst of the 1 percent — it’s the way they use their money to advance their economic self-interest and their ideology,” Greenwald told Alternet. “It’s not just about having money; it’s the use of the money, the use of the power — it’s the use of the money and power to impress and take advantage of others. And it’s the fact that they are fighting tooth and nail to make sure that capitalism has absolutely no restraints on it. And capitalism without restraints is a very ugly beast.”