This website can now be reached entering the following URL: www.friendsoftheclimate.org. Free "climate crisis is here" yard signs may be obtained by emailing anorthc@aol.com. The 6th Annual Climate Crisis Art Exhibit is calling all artists now
May 01, 2012 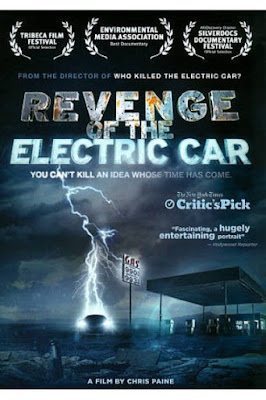 Revenge Of The Electric Car

By 2006, as many as 5,000 modern electric cars were destroyed by the major car companies that built them. Today, the electric car is back... with a vengeance. Without using a single drop of foreign oil, this new generation of car is America's future: fast, furious, and cleaner than ever. Narrated by Tim Robbins, and from the director of WHO KILLED THE ELECTRIC CAR?, the film goes behind the closed doors of Nissan, GM, the Silicon Valley start-up Tesla Motors and an independent car converter to find the story of the global resurgence of electric cars, following the race to be the first and the best, and to win the hearts and minds of the public around the world. It's not just the next generation of green cars that's on the line, it's the future of the automobile itself. "Revenge tells the story of that rare moment when the bottom line finally dovetails with the greater good" (Village Voice).

In 2006, filmmaker Chris Paine examined the short and troubled history of General Motors' EV1, an electric powered automobile that was fast, efficient and taken off the market under mysterious circumstances, in his documentary WHO KILLED THE ELECTRIC CAR?. A few years later, with the price of gas skyrocketing and the environment an even greater issue for many Americans, alternative vehicles are finally making their way into the mass marketplace, and Paine takes a look at four firms who are trying to put electric autos onto America's highways in his follow-up THE REVENGE OF THE ELECTRIC CAR. Bob Lutz of GM, after dropping the ball on the EV1, spearheads an effort to launch the Chevy Volt, one of the first plug-in hybrids from a major American automaker. Carlos Ghosn of Nissan puts his firm's resources behind an innovative fully electric auto, the Nissan Leaf. Elon Musk, who made a killing in the dot-com boom, is gambling his fortune on the Tesla, a sleek and high powered electric sports car aimed at the luxury market with a price tag of $100,000. And Greg "Gadget" Abbott is an ambitious mechanic who has launched a business transforming conventional autos into gas-free electric vehicles, though not without problems. THE REVENGE OF THE ELECTRIC CAR was an official selection at the 2011 Tribeca Film Festival.

"REVENGE is that rare artifact, a snaphsot of a major industrial shift on its way to a tipping point....A slick, enjoyable valentine to a retooling industry."-- Daniel M. Gold, New York Times