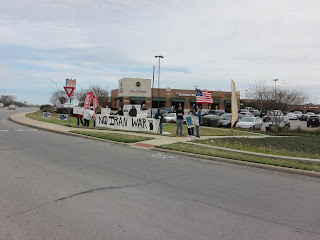 In solidarity with peace activists around the country and world, the Waco
Friends of Peace staged a protest against war, assassinations and sanctions in Iran. More than 70 cities reported protests on this date. At the corner of Waco and Valley Mills Drives, 12-14 activists gathered. Neither the IAEA nor the U.S. has found evidence of an Iranian nuclear weapons program. And yet the aggressive rhetoric against Iran is increasing. Thus the Waco FOP spoke out against war on Iran and against sanctions and assassinations. According to Middle East expert Professor Juan Cole, a U.S. war against Iran would cost 1-3 million Iranian lives, 15,000 American lives, and ultimately 9 trillion dollars to the U.S. We had a great and enthusiastic crowd for this action. I made several observations during the protest. First, almost all motorist response was positive. No doubt the American people are tiring of endless war. Second, we had new folks join us for the first time, an encouraging fact. Third, I admired the courage of the protesters spending 2 hours on a cold windy day in the elements. And finally, given the positive motorist responses of the day, I interpreted our mooning by a passing vehicle as an exuberant congratulations. Many, many thanks to all peace activists who helped out with the action.

WACO, Tx.-- The Waco Friends of Peace will sponsor a protest against war,
sanctions, and assassinations in Iran, Saturday, Feb. 4,
1pm until 3pm, at the corner of Waco Drive and Valley Mills Drive in
Waco.
The Friends of Peace will join this international day of mass action as
concerned citizens in the peace and justice community unite with the
Occupy movement to say NO to endless war and militarism. We oppose
sanctions, assassinations, and war on Iran for the following reasons:
1)The U.S. and the International Atomic Energy Agency (IAEA) have not
provided evidence that Iran is attempting to obtain nuclear weapons.
2) Thirty years of sanctions on Iran have not persuaded the country to be
more transparent concerning its nuclear program.
3) Iran has agreed to inspection of its nuclear facilities by the IAEA,
while Israel has refused.
4) War on Iran would lead to countless civilian deaths and injuries.
5) Many foreign policy experts (including General Mike Mullens) believe
that engagement and negotiation will be more productive in dealing with Iran and
that sanctions have clearly failed.
6) The U.S. economy has been in a dire situation. Another expensive war
would worsen our plight. Funds used for wars are desperately
required for human needs at home.

Note: I learned that we had brief video coverage on Channel 25, thus spreading the message a bit further! 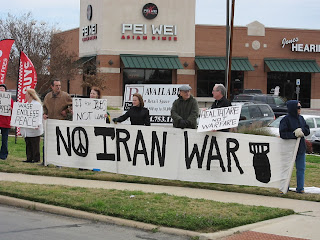 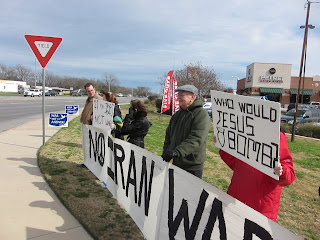 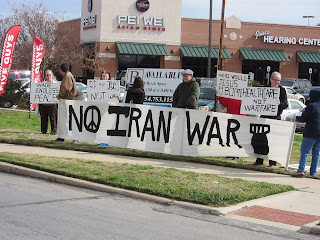 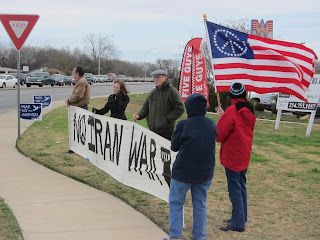 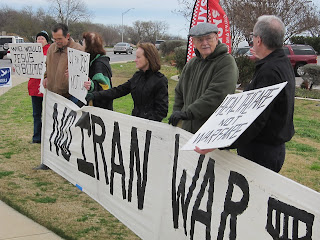 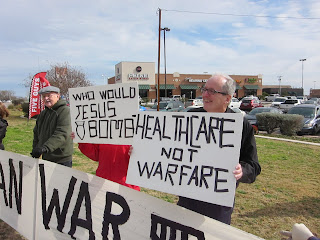