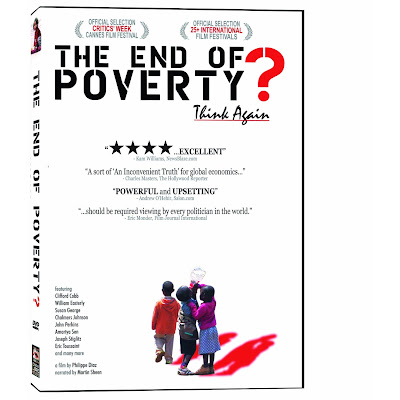 "The END OF POVERTY is a daring, thought-provoking and very timely documentary by award-winning filmmaker, Philippe Diaz, revealing that poverty is not an accident. It began with military conquest, slavery and colonization that resulted in the seizure of land and other natural resources as well as in forced labor. Today, global poverty has reached new levels because of unfair debt, trade and tax policies--in other words, wealthy countries exploiting the weaknesses of poor, developing countries.
The END OF POVERTY asks why today 20% of the planet's population uses 80% of its resources and consumes 30% more than the planet can regenerate? Can we really end poverty under our current economic system? Think again."

We cordially invite you to this event. Don't miss the opportunity to learn from this well documented and detailed film. As we call for economic justice with the Occupy movements, this film speaks to economic justice on the global level. Your opinions and input on the documentary and on items of business are vital. Enjoy fellowship with other progressives in this truly unique forum in Central Texas. Thanks for your continued support, interest, and actions for peace and justice.