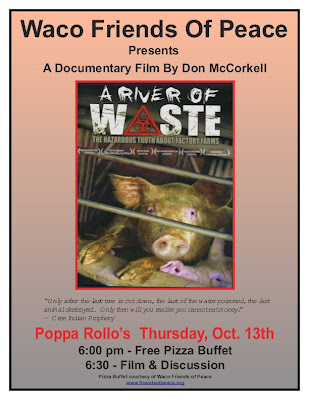 
“…A River Of Waste exposes a huge health and environmental scandal in our modern industrial system of meat and poultry production. The damage documented in today's factory farms far exceeds the damage that was depicted in Upton Sinclair's novel, The Jungle, a book written over 100 years ago. Some scientists have gone so far as to call the condemned current factory farm practices as ‘mini Chernobyls.’
“The European Union stands virtually alone in establishing strong health and environmental standards for the industry. In the U.S and elsewhere, the meat and poultry industry is dominated by dangerous uses of arsenic, antibiotics, growth hormones and by the dumping of massive amounts of sewage in fragile waterways and environments. The film documents the vast catastrophic impact on the environment and public health as well as focuses on individual lives damaged and destroyed.
“As one observer noted, if terrorists did this, we would be up in arms, but when it is a fortune 500 company, it is just ‘business as usual.’
"In 1906, public outrage at the scandal exposed by Sinclair led to major reforms thatcleaned up a corrupt and dangerous system. It is the hope of the filmmakers to mobilize a similar public outcry for reform."
Waco Friends Of Peace is proud to present this important film, and we hope that everyone will make an effort to come see it. As the Beatles said many years ago: “You know that what you eat you are.” This film really brings that home.