This website can now be reached entering the following URL: www.friendsoftheclimate.org. Free "climate crisis is here" yard signs may be obtained by emailing anorthc@aol.com. The 6th Annual Climate Crisis Art Exhibit is calling all artists now
May 31, 2011 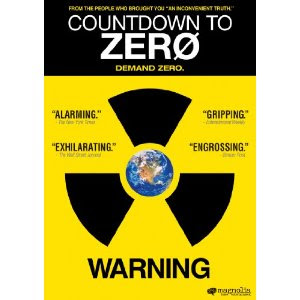 With a rigorous eye, Blindsight's Lucy Walker examines the arms race from the inception of the atomic bomb to the present. She builds her three-part structure around a speech from President Kennedy, in which he warns of "accident, miscalculation, and madness" in regard to nuclear power. If Kennedy serves as the film's conscience, physicist Robert Oppenheimer serves as its heart--the man who oversaw the Manhattan Project only to regret the death and destruction it would engender (footage of the pale-eyed Oppenheimer is almost as eerie as his prophetic words). Even Oppenheimer, though, couldn't have predicted the ready availability of highly enriched uranium in the years after the Cold War, one of Walker's more chilling revelations. Aside from the deadly explosions in Oklahoma City, Madrid, and other urban centers, Walker looks at a number of near misses. Her speakers include top minds from the fields of academia, government, and journalism, from Russia's Mikhail Gorbachev to Pakistan's Pervez Musharraf (former CIA operative Valerie Plame Wilson serves as de facto narrator). As Kennedy concluded, "The weapons of war must be abolished before they abolish us," and Walker ends on a note of guarded optimism, speaking with F. W. de Klerk, who dismantled South Africa's nuclear infrastructure during his administration. Most of Walker's other subjects, regardless of their political affiliation, agree that it's the right thing to do. Like Dr. Strangelove and Fog of War, Countdown to Zero marks an essential addition to the ranks of atomic cinema. --Kathleen C. Fennessy

Countdown to Zero traces the history of the atomic bomb from its origins to the present state of global affairs: nine nations possessing nuclear weapons capabilities with others racing to join them, leaving the world held in a delicate balance that could be shattered by an act of terrorism, failed diplomacy, or a simple accident. The film makes a compelling case for worldwide nuclear disarmament; an issue more topical than ever with the Obama administration working to revive this goal in the present day.

In addition to the educational value of viewing this film, the FOP will take action in support
of nuclear disarmament in the form of letter, petition, etc. during this evening. Other items
of business, including the new billboard, will be discussed.
Thanks for your attendance and your support of this progressive forum in Central Texas.