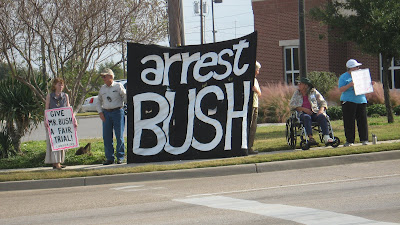 Ex-President George W. Bush held a signing of his new autobiography "Decision Points," at the Waco, Tx Books-A-Million store, on November 16, 2010. Local sycophants and mindless followers of Mr. Bush lined up to obtain a signed copy, even after the Bush history of war-for-oil, torture, illegal surveillance of U.S. citizens, and economic devastation of the country.
But dedicated members of the Waco Friends of Peace provided a counterpoint with strong voices of protest. The group was led by activists Harrison Ward and Kay Lucas, and included Kay Wilson,
Boyce Vardiman, Jane Vardiman, Linda Foley, Doris West, Aaron Ellis and Mrs. Haney. Several other brave members assisted, and I apologize for not having all
their names at this time. Because locating in front of the Bookstore would lead to ejection, the group positioned the protest at one of the Marketplace entrances on a public sidewalk. The signs stated: "ARREST BUSH" and "GIVE MR. BUSH A FAIR TRIAL!." Kay Wilson created a brilliant sign that read:
AUTHOR W=
OXYMORON
PURE FICTION
HISTORY REWRITE.
Reaction from local citizens was mixed, but we experienced a large amount of support from
passersby. One Bushite offered the group a free copy of the book to halt our protest. We politely declined that generous offer.The local TV stations and Tribune-Herald newspaper all covered the event!!
Thanks to all the activists who participated and made it absolutely clear that in "Bush Country" there are many who oppose now as always the President who took the country into
an illegal war based on lies and became the first President in modern times to tarnish the good
reputation of the U.S. by authorizing torture.