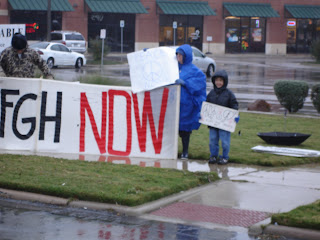 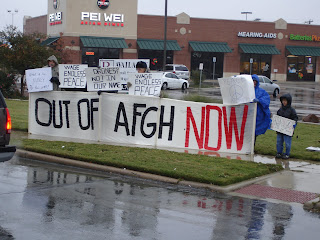 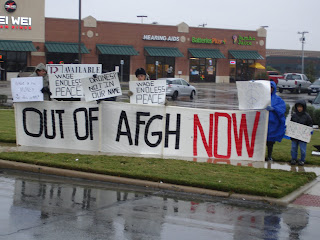 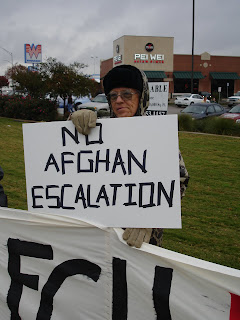 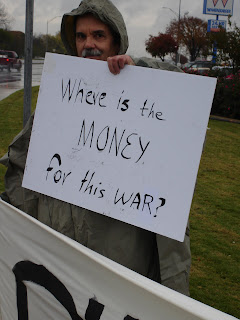 The Waco Friends of Peace sponsored a protest on December 1, 2009, the day President Obama announced an escalation of the war in Afghanistan. The Protest occurred from 3:30-5:30pm in bitterly cold rainy conditions at the corner of Valley Mills and Waco Drives. We absolutely opposed any escalation of troops in Afghanistan, and called for withdrawal of all military and paramilitary forces, initiation of serious diplomacy among all parties, and redirection of those war funds for vital human needs at home.
U.S. occupation of Afghanistan has not made our country safer, but has fueled hatred of the U.S. and helped recruit terrorists. Decades of war have resulted in an Afghanistan that is the fourth poorest country on earth. Prolonged war increases civilian casualties as well as U.S. deaths and injuries. At this time of financial crisis in the U.S., money squandered in war ($1 million per soldier per year) is vitally needed for jobs and health care at home. The war is simply unwinnable. As the Russians know, Afghanistan is the "graveyards of empires."
A majority of the Afghan people want us to leave their country. And a recent CNN poll found 58% of Americans oppose the Afghan war as well. Thus the Friends of Peace spoke for a majority of Americans when President Obama announced an escalation of war in Afghanistan: "NOT IN OUR NAME." 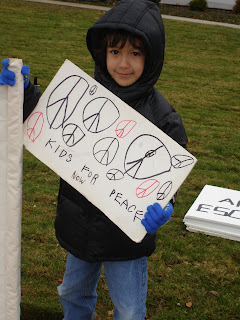