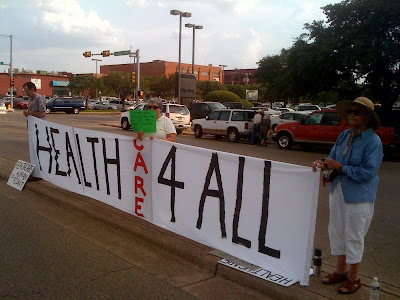 PRESS RELEASE.
For immediate release.
Sept. 3, 2009.
WACO, Tx.--The Waco Friends of Peace will sponsor a oounterprotest to the "Tea Party", today, 4:30pm, near Indian Springs Park in Waco. We believe that as one of the richest countries in the world, the United States has a moral imperative to insure all Americans have health care insurance. With a UN ranking of our health care of #36, and 40 million citizens uninsured, our system needs reform, to include a public insurance option, preferable a single payer system. All the major industrialized nations provide universal coverage, thus the United States can certainly afford to do so. In the words of Martin Luther King, Jr.: "Of all the forms of inequality, injustice in health care is the most shocking and inhumane."
About a dozen of us faced 1000+ teabaggers--and we clearly won a moral victory. Our message
was clearly visible to all those entering the tea party (including national buses), and the media.
Although many of the teaparty folks were civilized, others were very angry and told us to "get out
of my country." One Hispanic girl who joined with us encountered racist remarks. And the media
seemed very hungry to report our side of this issue. We were covered by all 3 TV channels
locally and the Waco Tribune-Herald. So the reporting of this teaparty included a clear statement
that there are those in Waco who disagree with their viewpoint and that we consider healthcare
in the United States a human right.
Thanks to all the Friends of Peace members who helped out, and to our friends from Baylor Democrats who joined in with us and did media interviews.