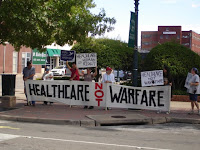 WACO, Tx.--The Waco Friends of Peace will sponsor a "HEALTHCARE NOT WARFARE" protest, Friday, September 25, 3:15pm, at Congressman Chet Edwards office, 600 Austin Ave., Waco. The protest is in solidarity with protests which will take place across the country on the 8th anniversary of the occupation of Afghanistan, October 7. We call on Mr. Edwards to oppose any escalation of troops in Afghanistan, and oppose additional funding of the Afghanistan occupation without a timeline for U.S. withdrawal. We further request that Mr. Edwards support a healthcare "public option," or a single payer system. In a wealthy country such as the US, it is morally outrageous that some 40 million Americans are uninsured and that 45,000 Americans die annually due to lack of health insurance. The $130 billion currently proposed for Iraq and Afghanistan could fund universal health care for a year. We exhort Mr. Edwards to help change American priorities by voting for HEALTHCARE not WARFARE. (press release). 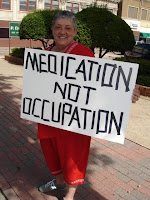 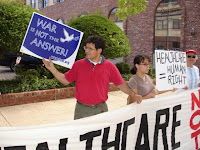 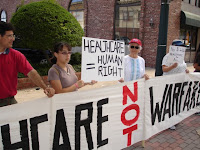 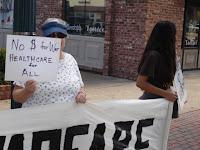 The action involved about 12 activists of all ages. We were excited to have some children participate, already developing a social conscience. We kept vigil outside Chet Edward's office from 3pm until 5pm. The reception from motorists was overwhelmingly positive. Three of us met for 30 minutes with one of Mr. Edward's
staff and had a productive discussion. The event was covered by the Waco Tribune-Herald which featured a large photo on the front of the Local section!! A photographer from the Baylor Lariat was also documenting the action. Thus we were very happy with the success of this protest. Our numbers were great for Waco, especially during work hours. Thanks to all the loyal FOP members, new folks, and kids who spent the time to speak their conscience. (We had the action
early as most groups are during this anniversary protest in early October. Due to absence of some members in October we needed to pick September 25). 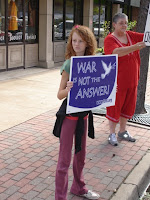 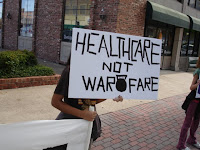 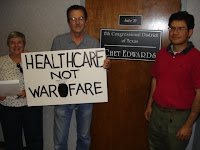