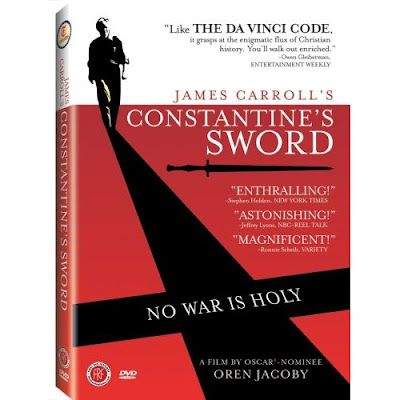 TITLE: CONSTANTINE'S SWORD
GENRE: Documentary.
DATE: Thursday, September 10
TIME: Pizza and announcements 6,
film and discussion 6:30pm.
VENUE: Poppa Rollo's mtg room,
enter from outside door on right
or from inside restaurant.
RATING: Unrated, suitable for
children.
AUDIENCE: All welcome.
FEES: Pizza buffet and film free.
RUN TIME: 96 minutes.
RELEASE DATE: Sept. 16, 2008.
Knowing that the right wing theocrats hand-picked Sarah Palin as their vehicle for gaining control of America and turning it into a Christian Dominionist nation, this documentary by James Carroll (who wrote the book of the same name) is especially compelling and insightful. Carroll is one of our favorite and most thoughtful of mainstream columnists(Boston Globe). Having been raised Irish Catholic and once been a priest, he has a remarkable insight into how religion and politics converge."Constantine's Sword" is a reflection and historical journey into how many denominations of Christianity evolved into a warring religion from the peaceful teachings of Jesus. Carroll focuses on the Roman Emperor Constantine who elevated the cross into a symbol that sanctified war, and made killing justified in the name of Christ and God.Carroll is the narrator and traveler who takes us on an expedition into how Christ's message became distorted over time, leading up to where the movie starts: the evangelical hot bed of Colorado Springs, Colorado, and the evangelical takeover of the U.S. Airforce Academy in that city. He then moves backwards in time to about 350 years after Christ's death, interweaving his journey with personal remembrances of growing up in an observant Catholic family.Sarah Palin was the Trojan Horse that the End-Times crowd demanded McCain put on the ticket as the price to pay for unleashing their mailing lists and full-fledged support on election day. They were counting on McCain not making it through his first term, with Palin assuming office as a true believer who is even more indoctrinated into Armageddon theology than Bush.Carroll is a reflective, deliberating guide through the death and torture that are most reflected in the Crusades. But the Holy Wars have never really stopped there. They continue to this day, but under other carefully-crafted pretenses.And Sarah Palin is prepared now to go to war with Russia. McCain would start wars because he doesn't know how to do much except engage in conflicts. Palin would start wars because it's God's will.One of the best lines in this provocative documentary is Carroll noting that the Vatican didn't condemn the massive aerial bombing of Vietnam, but would have vociferously denounced the war if the U.S. planes had been dropping condoms on North Vietnam instead of high-powered explosives.
I found this to be a very thoughtful, carefully crafted documentary; yet it delivered a strong indictmentof the pro-war attitudes of some Christian churches. However, I recall that at the beginning of the Iraq war, the Pope strongly condemned the U.S. invasion. So maybe the churches have learned to a degree from past experiences. In any event, the film may be controversial to some Christians in the audience and should spark a lively discussion.
At this time of right wing hysteria and resurgence of racism, your attendance
and support of this progressive forum in Waco is vital. We are honored by your
presence and input.
BEFORE the film began the Friends of Peace presented its 2009 outstanding local activist
award to Mrs. Sara Haney.
Her plaque read: "for steadfast support and courageous activism for Peace and Justice."
Those who know Mrs. Haney realize the award was well deserved. She has financially supported
the group and has been a loyal and brave activist and she has taken to the streets many times
to speak truth to power. We are all grateful for her fantastic efforts.