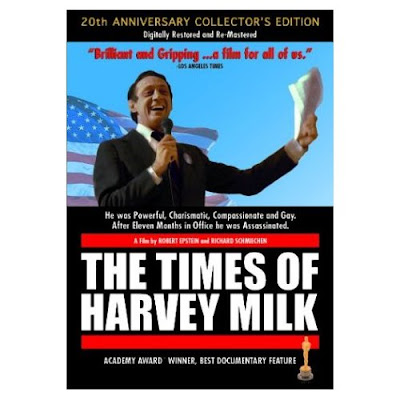 Title: The Times of Harvey Milk.
Genre: Documentary.
Date: Thursday, March 12.
Time: 6p.m. pizza/veggie buffet
and announcements. 6:30
film and discussion.
Venue: Poppa Rollo's Pizza mtg
room (enter from outside or
inside), 703 N. Valley Mills
Drive, Waco.
Rating: ok for general audience.
Run time: 88 minutes.
Awards: Best Documentary,
Academy Awards.
Admission: film and pizza free. all welcome.
A devastatingly skillful and emotionally compelling documentary, The Times of Harvey Milk charts the political rise and brutal slaying of the first openly gay city official in the United State, Harvey Milk. Ironically, the same election that brought Milk to the board of city supervisors of San Francisco also elected the man who killed him, a former police officer and fireman named Dan White. After White shot both Mayor George Moscone and Milk, his defense lawyers convinced the jury that White's judgment was impaired by depression and junk food, resulting in a conviction for manslaughter instead of murder--a verdict that prompted riots. With care and conviction, The Times of Harvey Milk captures not only Milk himself, but also the political and social landscape in which these events took place. The interviews--with friends, politicians, and journalists--are articulate and heartfelt, expressing the impact that Milk had upon this historical moment. --Bret Fetzer
"Brilliant and gripping...a film for all of us." ---Los Angeles Times.
"Two thumbs up."---Siskel and Ebert.
"Powerful, moving and dramatic."---Newsweek.
The recent drama "Milk" has brought the life of Harvey into the spotlight. So please join us to see the REAL
story of his courageous life in our documentary offering. Its a great film and should spur a lively discussion on
this vital issue of gay equality..