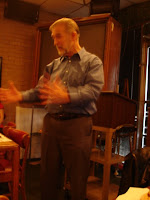 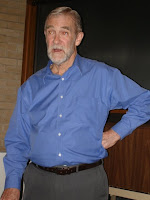 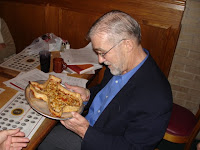 Images from Ray's
lecture at Poppa Rollo's Pizza. He is
presented with the
traditional Texas
shaped pizza by the
gracious and helpful owner of Poppa's Mary Duty. The crowd was standing room only and all were spellbound by the depth of insight and truth in Mr. McGovern's words. We truly were honored
to have him speak in Waco. 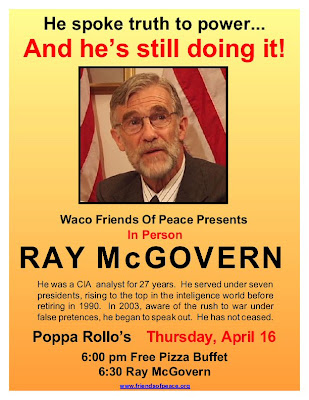 
We are pleased to announce that in April our Friends of Peace film / lecture series will present in person Ray McGovern. Ray was a CIA analyst for 27 years, serving under presidents Kennedy through George H. W. Bush. Ray’s responsibilities at CIA included chairing National Intelligence Estimates under presidents Nixon, Ford, and Carter, and preparing the President’s Daily Brief (PDB) under presidents Nixon, Ford, and Reagan. He retired in 1990. At his retirement ceremony Ray received the Intelligence Commendation Medallion and a letter of gratitude from then-President George H. W. Bush. In January 2003, after it had become clear that intelligence analysis was being corrupted by political pressure to “justify” an unprovoked attack on Iraq, a handful of intelligence community alumni, including Ray, created Veteran Intelligence Professionals for Sanity. VIPS’ first paper, a Memorandum for the President, sent on February 5, 2003, offered a same-day critique of Secretary of State Colin=2 0Powell’s address to the UN. In the memorandum VIPS warned that intelligence analysts were “increasingly distressed at the politicization of intelligence” and “were finding it hard to make themselves heard above the drumbeat for war.” The memo urged the president to “widen the discussion beyond...the circle of those advisers clearly bent on a war for which we see no compelling reason and from which we believe the unintended consequences are likely to be catastrophic.” Of course we know what then happened. However, Ray has continued to speak out, expanding his areas of public concern to such subjects as Afghanistan, Iran, corporate media, and the ongoing Israeli / Palestinian tragedy. In fact, there is no telling what subject Ray will choose to address at Poppa Rollo’s, but we can be sure that we will be hearing from an expert. In order to accommodate Ray’s busy schedule, April’s event will take place on the 3rd Thursday, April 16th. Be sure to mark your calendar and plan to attend – it will be worth it! --Harrison Ward.