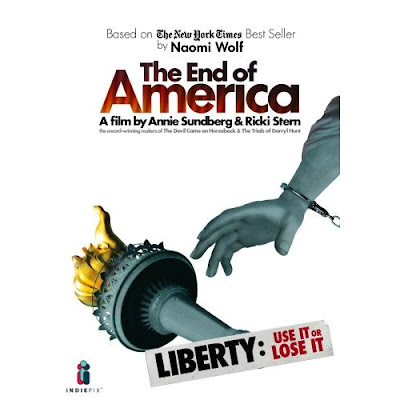 
meeting room (enter from in-


side or outer right door).

The Waco Friends of Peace


always strive to bring you the


freshest, most timely film or


lecture each month. Films or


speakers you are unlikely to


find anywhere else in central Texas. Our title this month has not even been
widely released on DVD. You do not have to be a conspiracy theorist to appre-


ciate "The End of America." The parallels between Bush's America and Hitler's


Germany are striking. The film beautifully sums up the damage to our democracy


from 8 years of the Bush regime. Now is the perfect time to review and contem-


plate the Bush legacy. And maybe celebrate a bit with his departure. Please


honor us with your presence and join the discussion. Help maintain this unique


forum in Waco. Thank you.


Along with the rest of America, best-selling author and feminist Naomi Wolf was overwhelmed by the swell of conflicting information and the sudden march to war after 9/11. Wolf looked to history to help her understand the dramatic changes she believed she was witnessing, and discovered the disturbing similarities between post-9/11 US policy and that of historically fascist regimes such as Mussolini's Italy and Hitler's Germany. Wolf authored her next book, THE END OF AMERICA, which demonstrated that the United States was on a remarkably certain path toward ending democracy. Taking the thesis of her book to the streets, Wolf set out on a national tour to discuss the evolution of America from a functional democracy into a closed, fear-driven society with a terrifying absence of due process. In this profound and eye-opening film, Award-winning veteran documentarians Ricki Stern and Annie Sundberg (THE DEVIL CAME ON HORSEBACK, THE TRIALS OF DARRYL HUNT) accompany Wolf as she discusses America's dangerous passage towards becoming a society of fear and surveillance, and expresses her plea to restore our nation's most cherished values.

REVIEW:
The End of America,” an unsettling documentary polemic about the erosion of civil liberties in the wake of 9/11, brings up matters many of us would rather not contemplate in the middle of a financial crisis and on the eve of a new administration. Federal laws enacted during the last seven years that threaten our constitutional rights, it reminds us, remain in effect. --Stephen
Holden, The New York Times.