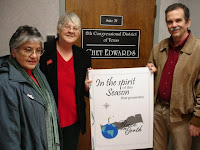 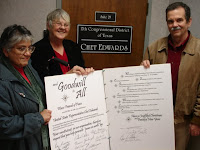 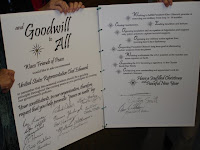 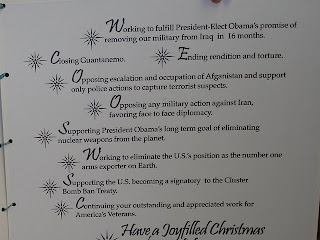 In anticipation of President Obama's promise to remove troops from Iraq in 16 months, United for Peace and Justice and other national groups organized efforts to contact Congresspeople prior to January 20. The Waco Friends of Peace decided to have an action during the Christmas break at the office our our District 17 Congressman Chet Edwards. Since Mr. Edwards is clearly a hawkish Democrat who is unlikely to receive any input from constituents supporting rapid withdrawal from Iraq, we felt it important to make a strong statement of our position. We designed a poster sized Christmas card for Mr. Edwards with our message for peace. The fantastic art work was
done by Kay Lucas, director of the Crawford Texas Peace House. On the morning of December 23rd 2008 we presented the card to the Waco office of Congressman Edwards. A local TV station was
present to record the event. Activists who participated included Linda Foley, Kay, and Harrison
Ward. The Congressman's office was very gracious in accepting the card and promised the Congressman would later receive it. The 9-point message can be read in the last image above (clink on photo to enlarge). We have no doubt that the unique nature of this communication
helped ensure that he read it, and hopefully he was influenced by its message.
Thanks to all the activists who helped in making this important statement to our elected
representative.