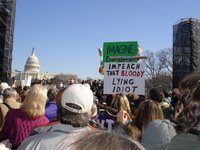 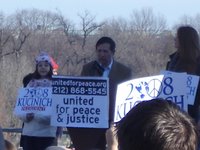 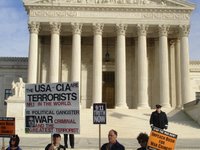 The news/documentary was produced by Democracy Now and is 1 hour in length. This documentary takes you beyond the 15 second sound bites of the corporate media, and places you in the middle of the massive rally and march which just happened. Experience the crowds, signs, messages, and speeches. Speakers included Rep. Maxine Waters, Bob Watada, Rev. Jesse Jackson, labor leaders, Iraq war veterans, Rep. John Conyers, Rep. Lynn Woolsey, Rep. Dennis Kucinich, Jane Fonda, Sean Penn, CodePink leaders, and Tim Robbins. Those who attended the event or other peace rallies will find this energizing. Those who have never attended a rally or are undecided about the Iraq war will find the film informative.

Time will be available after the film for discussion, including comments by individuals who were fortunate to have had the opportunity to attend the march. The discussion will include information about what steps we can all take in the Waco area to help end the occupation.
This is a crucial time, with the Congress currently debating resolutions to help end the war.
Please make your opinion known. You can call the Congressional switchboard and ask for the office of your Senator or Representative: 202-224-3121.

We will be honored by your attendance at this unique film event. Note: as announced in January, the 2nd Thursday is our regular film/forum night for 2007. Thank you.

As one speaker stated at the rally: "SILENCE IS NO LONGER AN OPTION."