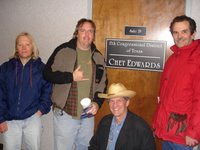 In January, 2007 we staged a protest at Mr. Edwards office outside, then entered the office and requested a video conference with the Congressman. We were told he was not available but that a meeting would be arranged (see details in blog below). By February nothing had happened. Thus on February 13 we repeated the action and stated we would just wait in the office until Mr. Edwards could give us a couple minutes of his time. After some discussion we were given a live appointment with the Congressman for February 20 in Waco.

Three of us met with Mr. Edwards and some of his staff members for 45 minutes. We thanked him for voting FOR the nonbinding resolution opposing the Bush escalation of the Iraq War and strongly urged him to vote AGAINST Mr. Bush's next supplemental funding bill to prolong the war. We found Mr. Edwards very informed, intelligent, and open to our ideas. It is not clear how he will vote however. And of this writing, the Democrats are working on various pieces of legislation to help bring the US troops home. I am concerned that the Democrats may not have the guts to take the needed steps to end this illegal war. We will keep in touch with the Congressman with our requests that he vote for steps to rapidly bring the US troops home.
Your calls to his office at this crucial juncture will be very helpful: 202-224-3121.

Our many thanks to Congressman Edwards for his time and consideration, and to his staff for their hospitality and help.

(On a positive note, a group of 20 staged a protest at Mr. Edwards' College Station office on Feb. 22. They presented many letters urging an end to the US occupation. Great! Two protests in one week, right in the heart of "BushCountry." For details: www.skiscoldwaterflat.blogspot.com )