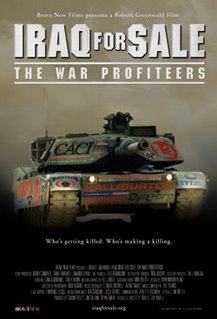 Acclaimed direct Robert Greenwald (Wal-mart; Outfoxed) takes you inside the lives of soldiers, truck drivers, children, and widows whose lives have been changed forever as a result of profiteering in the reconstruction of Iraq. The film uncovers the connections between private corporations making a killing in Iraq and the decision makers who allow them to do so.

70% of Americans and Iraqis want US troops out of Iraq. The US voters made their opposition to the war very clear on Nov. 7. Only 12% of Americans support Bush's likely escalation of the war. Many US generals oppose escalation. So why is that likely to happen? One reason is the tremendous profits of Halliburton, CACI and others, and the power of the military-industrial-congressional complex. Come learn about war profiteers at this critical juncture in US history.

Friends of Peace strive to bring you the latest in thought provoking progressive films usually not shown in Waco theatres, and often not available at all in this area. Your presence is greatly appreciated and helps maintain a forum for progressive thoughts and values in Waco.