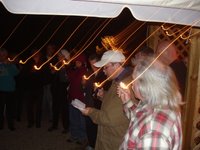 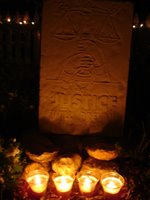 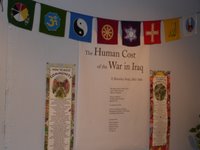 For 2006, the Friends of Peace Annual Vigil focused on the estimated 650,000 Iraqis who have 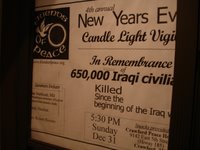 perished since the United States invaded in March 2003. The event was held at the Crawford Peace House (thanks for their hospitality) at 5:30p.m. on New Years Eve. We were truly honored at the presence of so many friends--the house was full; it was standing room only. A local physician presented details of the JohnHopkins study on Iraqi casualties that was published in The Lancet in October of this year. The most stunning finding: with 95% certainty, the number of excess Iraqi deaths (as a result of the US occupation) is from 400,000-900,000. Rev. Robert Flowers, a local Methodist minister and long time peace activist, gave a moving presentation on the death of Iraqi children in this war. We were then honored to have an Iraqi gentlemen discuss the Iraq occupation and civil war from his first hand knowledge--and he confirmed the accuracy of the Johns Hopkins study. The crowd was then further inspired by the words of peace activist and leader Cindy Sheehan. Her accounts of experiences in Jordan , breadth of knowledge, and enthusiasm to "Surge for Peace" were great. A short ceremony dedicated a stone monument which stated in Arabic "Justice will prevail if it be God's will."
Rev. Flowers (photo with cap) led a touching candlelight ceremony which included the reading of names and demographics of Iraqis who have died in this illegal war. Snacks and conversation followed.
Although the thousands in the US media and millions of US citizens have ignored the human cost for Iraqis of this occupation, our small group was sincere in its effort to commemorate the Iraqi dead, and to confirm that each Iraqi life is as important as an American life.