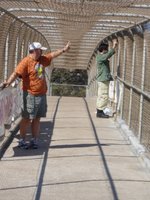 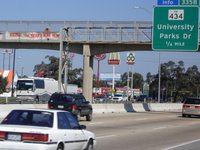 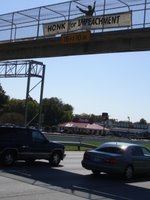 Saturday, October 21st several Friends of Peace members staged a freeway blog (hand-held) on the pedestrian overpass at I35 and 7th street, near Baylor University. Thanks to Robert and Mark for their dedication.

We held large banners facing the north and southbound lanes reading: "Honk for Impeachment" and "Bring the Troops Home Now." The traffic was heavy, with activities at Baylor, and a football game scheduled for 2p.m. The reception was very positive, with MANY honks and only an occasional negative gesture. We were there from 11a.m. to 1:30p.m. Calculating an average of 65 cars per minute and 2 adults per car, about 40,000 adults saw our message. A tremendous outreach with minimal cost. And a strong statement for those passing through Waco--the last place they would expect to read these sentiments. With the war disapproval rate at 60% and the Democrats poised to control some of the Congress, we feel it's important to continue to speak out.

Two local media outlets were represented by photographers, but none of their shots were used--appears to be a blackout by the corporate media, which is feeling the pressure of a likely Republican defeat, and a possible decline in war profits if the Iraq occupation ends.