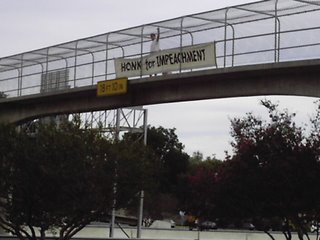 1. OCTOBER 5, 2006: WORLD CANT WAIT/DRIVE OUT THE BUSH REGIME.
The FOP joined over 200 other cities in a protest of the Bush administration policies--particularly illegal war, torture, illegal detention, decimation of the Constitution and Bill of Rights. A nice group of 10-12 of us were at the Valley Mills/Waco Drive intersection from 5 until 7:30 p.m. during rush hour. Our banner "Honk for Impeachment" received a very positive response. The Waco police attempted to thwart our protest, but we knew our rights and persisted. It was a very successful action.

2. OCTOBER 7, 2006: LIVE FREEWAY BLOG.
Two of us held the "Honk for Impeachment" banner in the overpass on I35 near Baylor facing the southbound lane for about 2 hours. We were stunned at the positive response--nearly constant honking, including 18 wheelers and pickup trucks. This is a first for Waco and a tremendous way to reach a huge audience and raise awareness. We will be back. (See photo above).

3. OCTOBER 19, 2006: "THE GROUND TRUTH."
Our film for the month is a documentary about the reality of the Iraq occupation from the viewpoint of the soldiers. A powerful film all should see. Poppa Rollo's Pizza meeting room, 703 N. Valley Mills. 6p.m. food service, film and discussion start at 6:30. Film free to public, all welcome.

4. BOMBING OF IRAN??
There is a lot of evidence this may happen, but there is no doubt many bush neocons want it to. The date Oct. 21st is being mentioned. We all hope bush will not create another disaster for the world, but we should be ready to publicly object if it does. Who else in Waco will speak out?