Friends of Peace will present the Waco premiere of Why We Fight, a documentary feature about the American war machine. Unforgettable personal stories are woven with commentary by a "who's who" of military and beltway insiders. Featuring John McCain, Gore Vidal, William Kristol, Chalmers Johnson, Richard Perle and others, this important film launches a bipartisan inquiry into the workings of the military industrial complex and the rise of the American Empire.

Inspired by President Dwight Eisenhower's legendary farewell speech (in which he coined the phrase "military industrial complex"), filmmaker Eugene Jarecki (The Trials of Henry Kissinger) surveys the scorched landscape of a half-century's military adventures, asking how – and telling why – a nation of, by, and for the people has become the savings-and-loan of a system whose survival depends on a state of constant war.

The film moves beyond the headlines of various American military operations to the deeper questions of why – why does America fight? What are the forces – political, economic, ideological – that drive us to fight against an ever-changing enemy?

And leaves the viewer with a haunting fact:“It is nowhere written that the American empire goes on forever.”

The film will be followed by a brief discusison period. 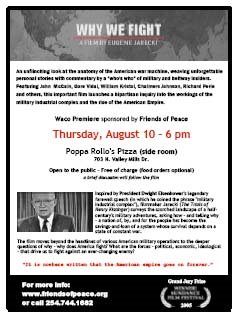 Free and open to the public; food orders optional.

Feel free to save, print, post and distribute our flyer for this event -- click here or on the image for the full size pdf document.