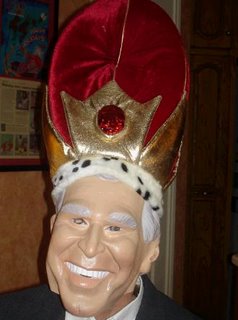 A public SOTU watch party will give Wacoans an opportunity to count and counter administration lies, distortions, cronyism, corruption, illegal activities, wasteful spending, environmental destruction and other crimes and scandals during the past year

4 - 6 pm: Rush-hour demonstration at the intersection of Waco Drive and Valley Mills. Huge banners will proclaim "Disgrace of the Nation" and ask passing motorists to "Honk for Impeachment". SPECIAL GUEST: "King George" will be wearing his crown and waving and enjoying his imperial powers. All those concerned about administration policies and determined to preserve the right to dissent even in "Bush Country" are invited to join in.

7:30 - 9:30: A SOTU watch party will allow those who are alarmed by the true "state of the union" and tired of hearing the same old lies and witnessing the dissolution of our peace, security and liberties to not only commiserate with each other, but to discuss ways to stop appointments and legislation that hurt and disempower average Americans. Location: Poppa Rollo's Pizza, 703 N. Valley Mills.